The Grandin Village Holiday Children’s Parade is a long-standing tradition held the Saturday before Thanksgiving. Line-up for the parade is between 10 – 10:30 am in the parking lot at Christ Lutheran Church at the corner of Grandin Road and Brandon Avenue. The parade begins at 11 am and proceeds to the corner of Grandin and Memorial Ave.

Our Mini Parade Float Contest last year was a great success! And this year, we’re taking things up a notch with some awesome additions.

As always, our priority is safety as this is a parade geared towards children, which is why the parade has never allowed vehicles except to play music for dancing participants. New this year, in order to inspire more creativity in the float contest, we are allowing small, ride-on lawnmowers (with horsepower around 24-28) to pull mini-floats. Participants will automatically be considered for the contest as long as they have something decorated that they are pushing or pulling that has wheels – strollers, hand-pulled wagons, shopping carts, and now small ride-on lawnmowers. We invite and encourage all creative ideas for designing your mini float!

Each group interested in participating must also have a sign or banner that can be held at the front of the group so the judges can easily see the organization/business/group being represented.

This year 4 trophies will be handed out: 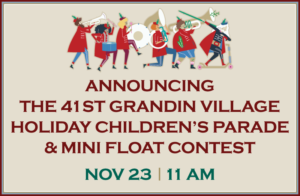